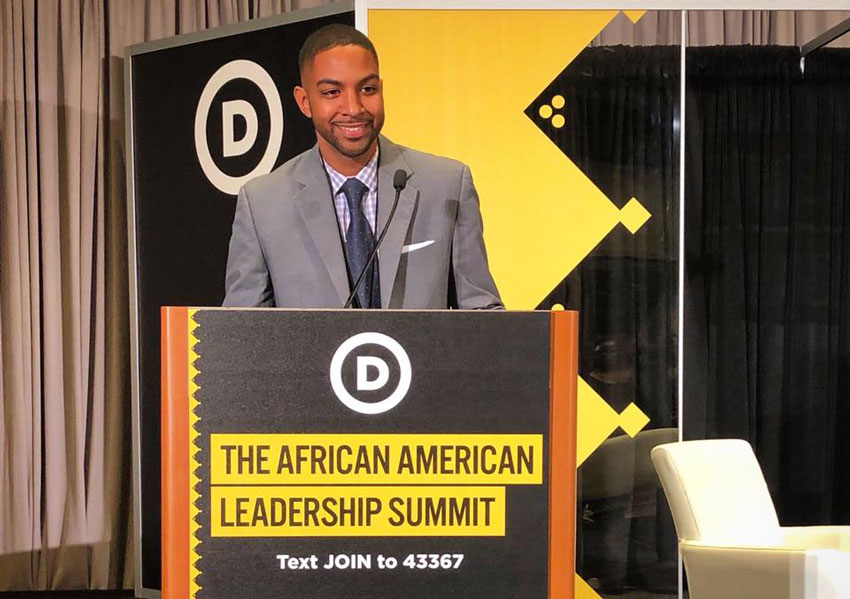 Augusto Goncalves, from Bridgewater State University, embarked on his internship at the U.S. Department of Housing and Urban Development knowing the political arena called, he just wasn’t sure where his interests fit in there.

The inspiration and encouragement he received from supervisors and coworkers set him on a path that wound through local, state and national politics. He is now the Finance Director for the African American Leadership Council at the Democratic National Committee. He shared his experience as an intern and his personal outlook on the upcoming election.

What do you consider to be the major takeaway or impact of your internship at the U.S. Department of Housing and Urban Development (HUD)?
Though I knew I wanted to be in the political arena, I wasn’t sure exactly what that looked like. What drew me to government and politics was the desire to make a difference, effectuate change and create access to opportunity for the greatest number of people, particularly the underrepresented and underserved. I was fortunate to intern in the Intergovernmental Affairs and Public Engagement Office (IGAPE) of HUD. It wasn’t until my internship that I realized the possibilities and that it was in advocacy and public engagement that my interests dwelled.

It was so inspiring and encouraging to see the brilliant individuals who were working around the clock — sacrificing time with family and friends — to ensure that they were doing their part to move the country forward. I worked closely with the Deputy Assistant Secretary, the Senior Advisor and others who were not only executing their plans and doing the work needed to advance President Obama’s priorities, but were also invested in my development. That meant a lot. It inspired me to work even harder. I saw how hard they were working and I wanted to assist and be involved in the high-level work. I was able to partake in some interesting opportunities, such as White House Business Council meetings, attending HUD hearings on the Hill and more. I am so grateful to all of my then HUD supervisors for the opportunity and guidance they provided. I consider them mentors and friends and still try to keep in contact with many of them.

I knew I wanted to continue advocating for people and helping problem solve via the government. I began to see internships as a helpful tool in narrowing your focus and interests.

How did your HUD internship shape subsequent career steps that may have led to your position at the DNC?
The internship at HUD gave me a love for advocacy and public engagement that would be a common thread in all of the positions that followed. I knew I wanted to continue advocating for people and helping problem solve via the government. I began to see internships as a helpful tool in narrowing your focus and interests. I held two other internships following my time at HUD: I interned in [Massachusetts] Governor Deval Patrick’s Constituent Services Office in Boston and served as a White House intern in the Office of Presidential Correspondence in Washington, D.C. I have been blessed with some interesting opportunities. Upon graduating from Bridgewater State, I moved to Las Vegas, Nevada where I was an organizer on President Obama’s re-election campaign. After working on the presidential campaign, I wanted to make a difference in my home state and so I moved back to Massachusetts to work for then-City Councilor At-Large, Ayanna Pressley. In early 2015, I joined Hillary Clinton’s northeast and abroad finance team during her presidential bid. In 2017, I moved back to Washington, D.C. to serve as Deputy Finance Director for The Collective PAC, which is the position I held prior to joining the Democratic National Committee.

Why is it important for college students to get involved in politics and the election process this year?
Our democracy is at stake and we know that the upcoming presidential election is the most important election of our lifetimes. The fate of our country and our future rest in the hands of the next group of political leaders. Everyone should turn out to vote in order to make their voices heard. There have been too many in our nation's history that have fought long and hard and many who have paid the ultimate sacrifice in order for us to have the ability to vote. We must be active in our participation and political engagement; voting is not the end — it is just the beginning.

College students in particular should have a vested interest in taking part in the political process as they will have to deal with the implications of the laws that are passed or not passed, and of the candidates who are elected. The decisions made by lawmakers will affect their lives for years to come, it is in their best interest to be involved, learn the process and the issues, and use their voice. To be clear, it is not just the presidential election that matters, but state and local elections as well. Democracy is not a spectator sport. If we really care about the issues we purport to care about and really want to work on them, then we should be active participants in our democracy.

What are you most looking forward to at the DNC in Milwaukee?
I am looking forward to being a part of history, seeing my party at work, and doing my part to ensure a better tomorrow for all. We have so many diverse voices in this country and in our party. All of us should be heard on that stage.

The National Convention process is an extraordinary tradition in American politics. To be there to experience the grandeur, interact with the history and learn from the experts is a once-in-a-lifetime educational opportunity. It could be the start to your career in politics, media, events or more.

As Augusto put it, “Through the great education I received at Bridgewater, I was able to take advantage of key opportunities like The Washington Center, which helped to shape my career trajectory. Access is critical to one’s growth and development.”

How are members of The Washington Center community stepping up to help during the coronavirus pandemic? VET...