Professor Pilar Barbosa, one of the most renowned academics in Puerto Rican history, was a lifelong advocate of closer ties between her home island and the United States. Though she passed away in 1997, she would no doubt have been impressed by the ten teachers and professors who came to Washington, D.C. two decades later thanks to the program that bears her name.

Working in tandem with The Washington Center, the Pilar Barbosa Education Internship Program serves as a conduit for curious educators from Puerto Rico to learn best practices and the latest teaching techniques from their D.C. area colleagues.

As soon as they arrived in Washington, they hit the ground running, visiting the Francis Scott Key Elementary School in Arlington, Virginia. Pilar Barbosa participant Karen Rivera, for one, was impressed by what she saw on the premises: “The school we visited was very beautiful, fully equipped with technology and resources for all the students; I learned new approaches, styles and differences between dual language and bilingual schools programs.” Over the coming days, they also took in some of the familiar Washington D.C. sites -- the Kennedy Center, the Capitol Building and the Library of Congress -- before meeting with representatives of the U.S. Department of Education to compare and contrast the Puerto Rican education system with those of various U.S. states.

Later that week, the educators sat down with George Laws, the Director of Government Affairs at the Puerto Rico Federal Affairs Administration (PRFAA). Charged with running the commonwealth’s interactions with the federal government, Laws is, in a sense, tasked with being a jack-of-all-trades when it comes to his knowledge of public policy. As a result, he was able to serve as an effective springboard for the educators’ curiosity. And curious they were, for over the course of the next hour, they engaged in a lively discussion on many topics to gain a general insight into American political issues, the state of affairs on the American mainland and the future status of the commonwealth.

This compare-and-contrast proved valuable at the beginning of the next week, as the Pilar Barbosa fellows plunged into the nitty-gritty of education philosophy. The Washington Center’s own Sherrod Williams, Director of the Academic Internship Programs, paved the way forward with a presentation on experiential education. Williams delved into the differences between the “two big buckets” of experiential education models: field-based ones taking place outside the classroom (internships and service learning) and classroom-based ones (role-playing and in-class games). To demonstrate their understanding of this line of thought, the educators divided into groups and devised their own lesson plans incorporating experiential education. Among their ideas were for students to interview former Puerto Rican sugarcane field hands to gain insights into the island’s history, planting a community garden and creating a dialogue concerning classroom objects to help to distinguish between proper and common nouns.

Later that day, Sarah Olson, a School Based Technology Specialist for Fairfax County Public Schools, spoke to the fellows about ways they can incorporate innovative technology into their classrooms. Olson herself stated, “Technology has changed in twenty years, but the way we teach has not. Where we once stood in front of a chalkboard, we now stand in front of a screen.”

Yet with the world constantly changing and the need for educating the young always a necessity, the notion of “digital citizenship,” in Olson’s opinion, also needs to be taken seriously. Olson said, “We have to get [the students] somehow engaged. Anything else risks failure.” To that end, Olson was able to suggest to the Pilar Barbosa fellows several tech platforms to improve the array of students’ unique needs. Anonymous texting polls, for example, allow shy students to make their voices heard without placing undue pressure on them. Virtual field trips (using tools like the street view of Google Earth) allow for students from disadvantaged and underprivileged backgrounds to see an otherwise inaccessible world outside their community. Others tools (such as Prezi, Google Classroom, Google Draw and green screens) are useful because of their cost-effectiveness, although Olson was the first to admit that teachers instructing students shouldn’t “figure that just because they’re young, they know technology. It takes a lot of frontloading.”

The educators closed their two-week stint in the nation’s capitol with a sit-down at the Brookings Institution. Michael Hansen, Director of the Brown Center on Education Policy, was eager to tell his guests about the role think tanks play in the Washington policy ecosystem. He then turned to several topics in education policy including teacher quality, teacher evaluations and value-added measures, on all of which the educators were sure to pepper Hansen with multiple questions.

All of the Pilar Barbosa participants certainly had different experiences in Washington. But one thing is for sure — with so many talented educators returning to their schools, the declaration of one of the educators that she had “learned new and sensational things” will soon be experienced by scores of Puerto Rican students as well. 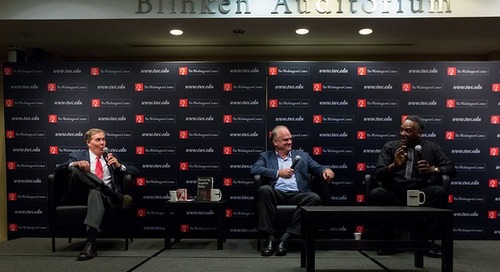 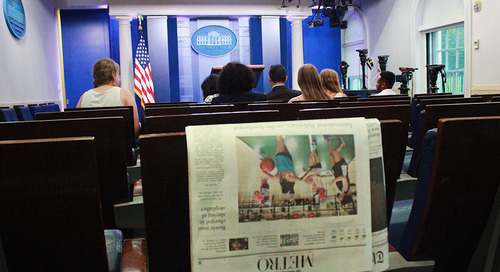 For ordinary viewers, Meet the Press is merely the title of America’s longest-running news series. For TWC'...