Home » Articles from The Washington Center » Making it as a Lobbyist in Washington, D.C.
× Share this Article 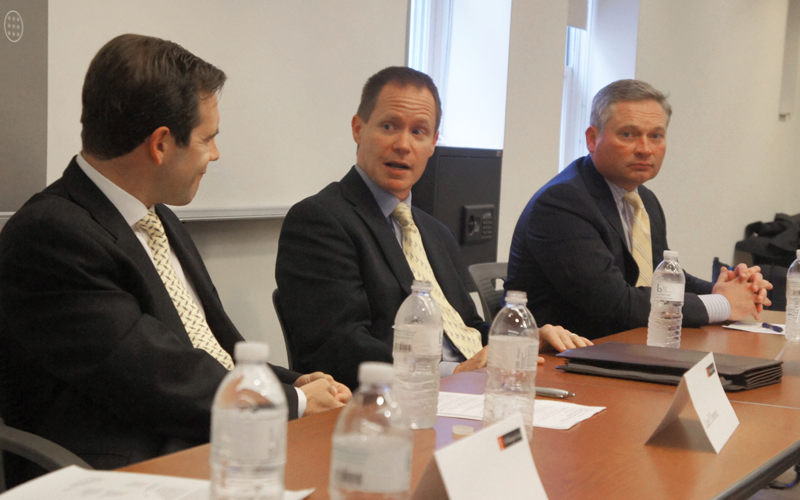 This event provides students with the chance to ask experts questions in a comfortable environment. On Monday, July 22nd, the following professionals took time out of their busy schedules to field questions from summer 2013 interns and talk about their current positions in a variety of sectors. Panelists included:

Moderating the panel was Rudy Barry, 2005 TWC alumnus and managing director at Whitmer & Worrall. He asked the panelists questions relevant for anyone interested in positions similar to those highlighted above.

Barry: Can you shed some light on how to transition into the lobbying world?

Black: It is not something you are able to just learn from a textbook. One of the best ways to transition into a career in lobbying is from being a staffer on the Hill. In this city, you have to get your foot in the door.

Donovan: Doors open when they open. I would recommend sitting down with anyone you can, because this town is very fluid. It's about four things:

Realize that your career has everything to do with your reputation. At the end of the day, your net worth is what people are saying about you. You need to develop all of these things: smarts, hard work and integrity.

McMenamin: Show up for everything because sometimes it's not something you can plan. But realize that once you're entrenched in life here, you may have to stay for the rest of your life. Finally, make sure you're kind to everyone.

Barry: Have you ever had to lobby for something you personally were not in agreement with?

Donovan: I work for a trade association so I don't have to juggle a ton of issues. When you're lobbying the other side, it always comes back to the district and constituents.

Black: When you're in job interviews, I hope you interview them as much as they interview you. I remember when I used to think everything was black and white but that isn't the case at all.

Barry: Now with the rise of social media, how do you approach the news environment and the need to respond quickly?

McMenamin: When you work in the government sector, requests are usually handled by the Communications Department. I would advise that you never field a question yourself.

Black: I remember thinking early in my career that it was so cool that I was getting paid to read the newspaper. Situational awareness; that's an important part of our jobs. Watching Twitter and understanding who is important to follow is crucial as well.

Donovan: Our most potent tool in a grassroots career is to harness channels, like Twitter, to their full potential. The challenge is really trying to keep up with everything.

What does it take to make it as a lobbyist?

John Faircloth, a student at Belmont University and intern at Financial Executives International, told the panel that since first arriving in D.C. he has observed lobbyists providing a lot of benefit for different interest groups. He wanted the panelists to explain how they represent the common everyday person in their fields. Donovan shared that part of his efforts is, "mobilizing ad grassroots, but also informing people about his efforts and the efforts of Associated Builders and how Contractors Inc. will affect them. At the end of the day, any kind of interest needs a place at the table and it's the lobbyist's job to inform and educate." Black used the example of oil pipelines: "For me, it isn't hard at all to be an advocate as long as you are sticking to the rules and keeping prices down. You have to realize that every company and association has someone in town." Barry, the moderator, also provided his perspective: "There are interests lobbying everything from A-Z so you can't broadly condemn an entire industry. You always need someone to provide unbiased education."

Michael Gannon, a student at Mississippi University for Women and the Council of State Governments intern, inquired as to whether it's easier or harder to get through to new members of Congress. Donovan said that the way to remedy this is by making sure to "...orient people. It's hard, when it's around a recent election and you have 15 new members as well as new staffers to train. You have to go after new members and cover all of your bases, but realize that they are not always as green as you think." McMenamin shared invaluable advice that "...there is a roadmap for older members while with new members, you actually have to navigate."

Guy Sergi, a student at Saint Anselm College and intern at Akerman Senterfitt, asked if any of the panelists have ever been a part of trophy legislation. Donovan shared that "...victory on any scale is exciting, especially after having to deal with one of the most prolific Congresses in history." Black agreed and added that most of his experiences watching Congress has made him cynical and that in a lobbying profession, "...you tend to have more defeats to learn from than victories."

Christopher Liebold, a student at Ohio Dominican University and intern at the Senate and House Placement, wondered if it is easier working with staffers in the Senate. Donovan said that sometimes in a position, you have to play "...good cop, bad cop depending on the issue. A productive Senate isn't always a good thing." Black added that right now there is, "...a period of relative peace in the Senate compared to last Wednesday. Are we passing bills that we know the other side won't pass? You have to assess where the opportunity is and go from there."

Tyler Day, a student at East Stroudsburg University of Pennsylvania and intern at Chwat and Co., Inc., wanted to find out if any of the panelists had experienced lobbying at the state level. McMenamin said that it varies from relationship to relationship. It's more, "...insular because there are local people with information." Barry, the moderator jumped in, because he has had a "...fair amount of state lobbying and shared that it is hard to predict, on a macro level, the decisions of sometimes 12 different states. Each state has their own way of doing things and are passing legislation."

Rachel Schwalm, student at West Chester University of Pennsylvania, found that during her current internship at Guide Consulting Services, professionals have personal ties to what they're lobbying for in D.C. She asked the panelists if that was also something they also felt was pertinent to their field of work. Donovan responded that there is "...certainly the need to be passionate. Believing in what you're lobbying is important." Black said that people with personal ties to the issue certainly have a head start. McMenamin's answer differed from the first two, sharing that he "...was thrust into lobbying because he needed a job. Sometimes you fall into things in life and later become passionate. If you're good at it, things can start to happen."

Whether lobbying for a trade association or at the state level, each of the three panelists had words of wisdom to offer for all the political leadership interns in the room. 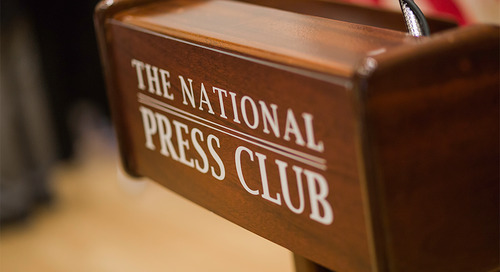 WASHINGTON, D.C. – Five colleges and universities were chosen this year from more than a hundred nomination... 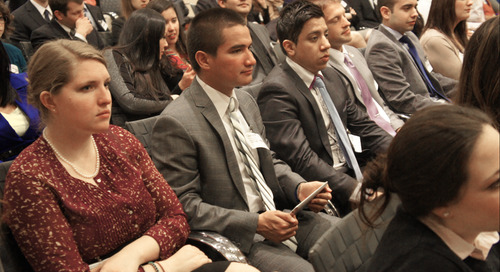 Learn about this exciting opportunity to work at the world's largest library. Apply by April 8, 2021 to be considered.